Sometimes, finding your destiny means doing the exact opposite of what The Fates have planned.

Winning the heart of an immortal assassin was a dream come true for Kristia Tostenson. Now she’s knee deep in wedding plans, goddess lessons, and stolen kisses. But her decision to become immortal could end in heartbreak — not only for Kristia, but for the god who loves her. Because while Ull would do anything to protect his bride, even the God of Winter is powerless against the Norse apocalypse. Ragnarok is coming.

And the gods aren’t even close to ready.

When I came to, my chest heaved with sobs. Cold sweat cloaked my body from my forehead to the backs of my knees. My hair was damp, my pulse was racing, and my fingers gripped the sheets so tightly my knuckles ached. I was in my room at Ýdalir, the one place I had always felt safe. Only now I was absolutely terrified.

I ripped the covers off and wrapped my arms around my legs. My nose twitched at an unfamiliar smell. I pulled the cord on the bedside lamp, and looked around to see what might be burning. There was no smoke in the room; all of the furniture seemed to be intact. But when I glanced down, I saw the hems of my pajamas. They were black, singed from the fire I’d desperately hoped had been part of a dream.

This time things had gone too far. If my smoldering pant legs were any indication, being injured in a vision could have far-reaching worldly consequences. And if Elfie had come that close to killing me . . .

Ull had his rules, but I no longer cared. I jumped out of bed and raced down the hallway. When I reached his door I pounded on the distressed wood. Tears streamed down my face but I didn’t bother to wipe them away. The downpour was too intense; it wouldn’t have done any good anyway.

The door flew open and Ull stood on the other side. He wore a loose pair of grey sweatpants and nothing else. Oh hot bejeebus. There was no way this guy was for real. It just wasn’t humanly possible to look that good.

Despite the agony coursing through my awakening consciousness, this was a moment of glory I’d remember forever—the first time I saw Ull’s naked torso. His sweats hung low on his hips, affording me a view of the cut just above the bone.

“Kristia?” Ull rubbed the sleep from his eyes. He took in my matted hair, tear-streaked face, and shaking hands. “Great Odin. What happened?”

He pulled me to him, crushing my face against the muscles of his chest. The knot in my stomach loosened infinitesimally. Just being near Ull gave me peace, but being this near Ull was like taking a sedative. Breathing in his woodsy smell made my panic subside. And when he pressed his hands against me—one to my hair, the other against the small of my back—my gut knew I was safe. Nothing bad could happen to me so long as I was in Ull’s arms. I inhaled again, letting his familiar scent fill me from the inside until my shaking stilled. Then I pressed my lips against his skin. Hard.

“I had another vision and it freaked me out. Can I stay with you?” I didn’t take my lips off his chest as I spoke. I couldn’t. He tasted divine—like spruce and soap and home. There was a very real possibility my mouth might be permanently adhered to his flesh, like a kid who’d tried to lick a frozen railing.

Only this was far less unpleasant. 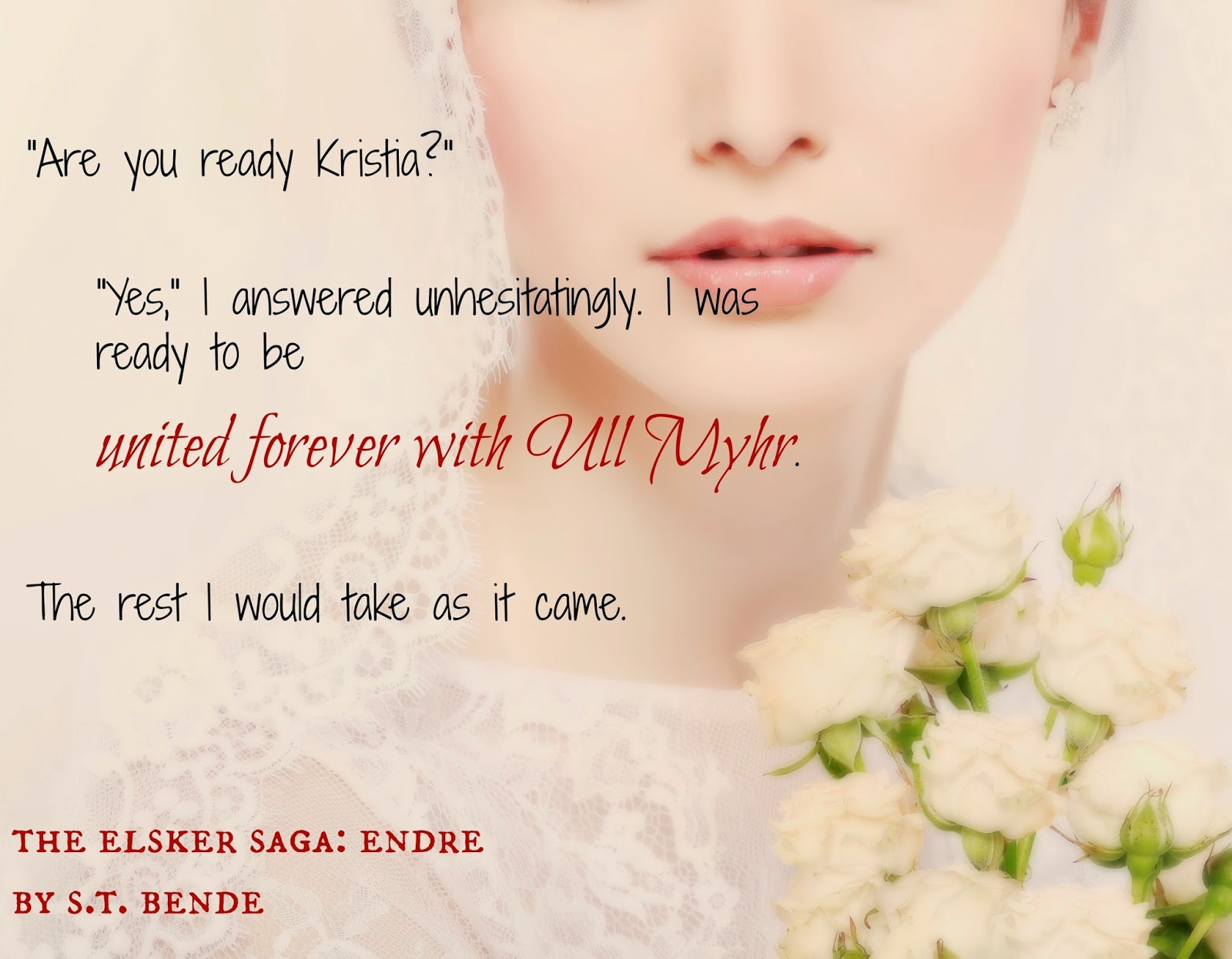 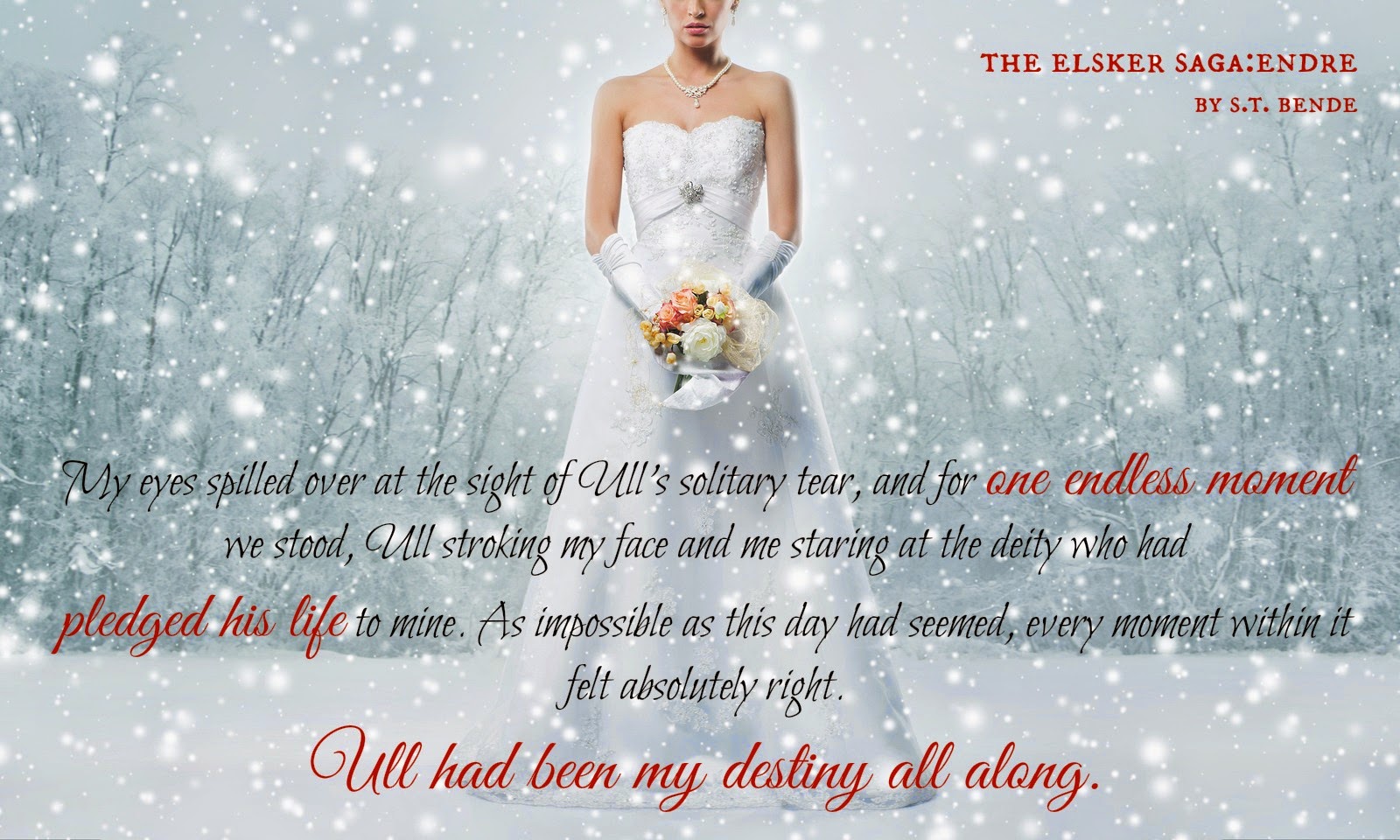 What reviewers are saying about The Elsker Saga:

“The characters will leave an imprint on your heart and mind for a long time to come.” -Lisa (Bound by Books)

“Bende takes classic bits of Norse mythology and throws in original elements to create her own tasty Nordic blend… I’ll definitely be checking out the sequel!” -Bookalicious Reviews

“One of my favorite books of the year.” -White Zin Bookends

“Action packed with a heart pounding romance!” -Curse of the Bibliophile

“This book was nearly impossible to put down and I’m dying for the sequel!” -Brittany and Bianca Blab Books (now BiblioBelles)

Inga Andersson is the envy of every girl in Asgard. On the surface she has it all — great friends, a job as Odin’s personal fight choreographer, and a happy ever after with her realm’s hottest assassin. But when evil invades Asgard, her perfect world comes crashing down. Someone is planning to kill off the gods, and Inga’s best friend Ull is first on their list. With the Norse apocalypse a nanosecond away, Inga has to decide how she’ll spend her final moments of freedom. Because from the moment this battle begins, Inga’s happily ever after will be nothing more than a memory.

Some things are worth fighting for.

Elsker: The Elsker Saga Book One

You don’t win the heart of an immortal assassin without making a few enemies along the way. Kristia Tostenson prefers Earl Grey to Grey Goose and book clubs to nightclubs, but when she transfers from her one-stoplight town to Cardiff University in Wales she falls in love with Ull Myhr. Her new boyfriend isn’t exactly what she was expecting. He’s an honest to goodness Norse God – an immortal assassin fated to die at Ragnarok, the battle destined to destroy Asgard and Earth. Kristia’s crazy visions are the only thing that can save their realms.

Before finding domestic bliss in suburbia, ST Bende lived in Manhattan Beach (became overly fond of Peet’s Coffee) and Europe… where she became overly fond of McVities cookies. Her love of Scandinavian culture and a very patient Norwegian teacher inspired the books of The Elsker Saga. She hopes her characters make you smile and that one day, pastries will be considered a health food.

Find ST on Twitter @stbende or her blog (http://stbende.blogspot.com). While you’re at it, introduce yourself to @UllMyhr — when he’s not saving the cosmos from dark elves, he loves meeting new friends. Especially the human kind.